We Asked INCubatoredu Alums:  "What Did This Class Do For You?"

Hear about the INCubatoredu student experience and the journeys that have followed from INCubatoredu alum.  The perspectives range from one to five years after taking the course.  We caught up with them at the INCubatoredu National Summit after they spoke to a group of educators in a panel discussion.  They shared takeaways from this course...how they benefited, and how this course supported their post-high school plans, in expected and unexpected ways!  They also offer student-to-student advice for who should take this class and why...

What I liked the best was the free flow format of the class -- the way the class was set up. It’s a different structure than a normal class -- you were in this whole different world. You felt like you were at an actual company, working a real job.

On a very basic level, I think INCubatoredu helped me just on how to talk to people and how to sell myself. Throughout the entire program, you're selling a product, and you're talking to mentors and other adults. In the real world, it really helps to be able to sell yourself to others and network and make more connections.

INCubatoredu is a lot more fun than other classes. It's a lot more hands on. You're actually accomplishing something and you get that sense of accomplishment at the end of the day. Other electives just feel like a normal class with a lot of structure and repetitiveness. INCubatoredu definitely steps apart from that.

Before I started the INCubatoredu program, I thought entrepreneurship was just about starting a business, but now I see an entrepreneur more as someone who can see opportunity and then take advantage of those opportunities. 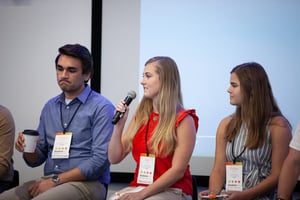 You walk into class, you don't feel like you're in school anymore.

INCubatoredu really felt like an actual office space, kind of a free for all, but in a good way! You got to decide what you wanted to do each day.

Actually, the internship that I have right now is almost exactly like what I learned and what I did every day in my INCubatoredu class, so it completely prepared me for that. I mean, it's just a totally different environment and it's just so hands on, and really prepares you for the real world. The independence of the class was great.

INCubatoredu is not class. It's a startup project where you get to work with your friends, get real funding, and test those projects in real life. I used to think entrepreneurship was working at a small startup, but now I realize it is about having a creative mindset that allows you to go beyond your limitations … it’s about taking risks and stepping outside of your comfort zone. INCubatoredu gave me confidence to be able to communicate with people.

So for me, my favorite part about INCubatoredu was being able to walk away from the class with the knowledge of how to start a business, and an understanding of all the correct steps to take, and the order in which to take them. Which ultimately allows you the freedom to do that outside of school.
Comparing this to a standard elective class is kind of like apples and oranges in a way. Ultimately, it's walking into a classroom where you are supposed to be uncertain. Having a curriculum where there is that freedom to choose and build your own path is such an incredible experience that you just really can't find anywhere else.

(Now in college), one of the biggest differences between me and other people who are in this college entrepreneurship program is that I've seen this before. This wasn't my first time stepping into the shoes and understanding, where do we start? What's the first thing we do? So, I think having that already in my head - of what to do, where to start -- that's just afforded me so much freedom, especially in terms of starting my own startup.

I remember my freshman year of college. One of my professors in business school said, an entrepreneur is somebody who jumps out of a plane and builds their parachute on the way down. And for me that was really perfectly illustrated with INCubatoredu where you are taking that leap at the beginning of the year, but then you have to piece together your own way, your own route to the ground, and try to create that soft landing and really create a successful, ideal product. Being an entrepreneur, what I've learned through INCubatoredu, and later on in life, includes the importance of taking a risk, taking a leap of faith, but then also having the ability to support it.

The thing I liked best about INCubatoredu was probably the new opportunity. It was something that I had never seen before. Being a high school student, and taking on the real world and actually applying what I learned in the classroom outside of the classroom -- it was really cool. And, a great experience at such a young age.

INCubatoredu pushed me out of my comfort zone. I had always worked in teams, trying to make myself a leader, but this class really made me realized that in order to get things done, you’ve got to be assertive, you’ve got to be really confident. It made me better able to handle situations where I may be collaborating with organizations that are well established, and communicate with real CEOs and a real CSOs – where I go into that meeting with confidence and the ability to sell myself to the point where they're listening. Having that training was great, I loved every second of it.

So, even if you don't like business, I recommend taking INCubatoredu, simply 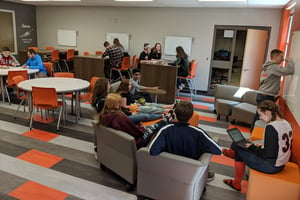 because some of the core skills you learn – they don't apply to only business. For example, how to carry yourself - from a professional brand standpoint, I think it's one of the biggest indirect things you learn from INCubatoredu. And, learning how to carry yourself in a conversation, how to communicate with people, read them, I don't care what you're doing after school, but you're probably going to be talking to people during your day. Learning the communication skills, even at the most basic level through INCubatoredu was instrumental for me in the real world and throughout my collegiate career.

INCubatoredu has prepared me beyond belief for almost every aspect of my life that I can think of, business or not. And, I think the biggest benefit is getting exposed to it at such a young age. You don't realize it at the time, and I can attest to this … But after finishing my collegiate career, entering the real world and looking back and seeing what I learned from INCubatoredu, it was clear I had a head start. And I think that's the biggest thing – when you are taking this course, you need to realize you're learning a lot from it.

You're learning skills that are going to prepare you monumentally compared to that student - to your left in your collegiate class - that didn't take the program. And when you get that question from your professor, "Hey, have you guys seen this before? Do you have experience with this?" You'll be one of three people to raise your hand in a big lecture hall, and it's a good feeling.